I've been home from school for about three weeks now. The first few weeks were pretty active: there were plenty of things to go to, and most of my days were booked. The past few days, though, have been on the dull side and I was looking for something to do. When I asked, Helen said that her grandmother had been eyeing desktop organizers, and that perhaps one of those would be a satisfying project. After brainstorming for a while, she thought of a list of things that this organizer could ... organize ... for her grandmother: 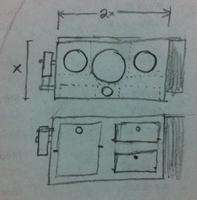 It seemed a cool project, so I designed a little box that could store almost everything Helen had described. There's a reel of scotch tape on one side, a tearoff calendar hanging from the other side, a few pivoting shelves on the front face (they pivot about their middle; press the bottom and the top swings forward). The top of the unit features a set of differently-sized holes with internal dividers to hold flashlights, pens, pencils, and whatever else fits inside. 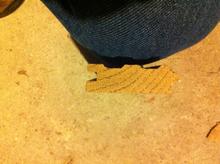 I elected to use oak floorboards to fabricate the thing. Alongside all the scrap in the basement is a (rather large) quantity of floorboards. They're all cutoffs from when the house was refloored and vary in length from 6" to a few feet. All of the boards have tongue-and-groove patterns cut for laying.

The first order of business was to get rid of the tongue and groove. Three cuts on the tablesaw took care of that. (Set the fence, run all the boards through, repeat) Since each board was so short, it took a lot of cuts through a lot of boards to make the needed amount of planks. I cut each board in half to create 2¼x¼" planks. 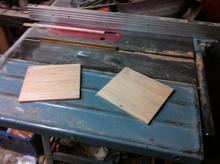 I paired boards together as they looked good, then glued them up overnight into larger planks. This morning, I unclamped everything. So far, it looks good.

See you tomorrow! (Or next month!)