Let there be cake! 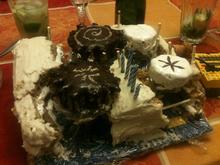 My girlfriend's birthday was a few weeks ago. Her 21st, to be exact. This was also the first birthday I'd be present for: she didn't celebrate anything the first year I knew her, the second year was in Germany, and this is the third year we've known each other. In the spirit of the occasion, I wanted to make sure she'd be happy with the party she had.

I asked her all sorts of things - who do you want to invite? Do you want a piñata? Just for kicks? What about a cake? What flavor? What theme? What about dinner? You know. The usual.

The cake, frankly, was the most interesting part. She mentioned being interested in something engineering themed. Maybe a gearbox, she said. Maybe some sort of control panel. Ooh! What about a cake with a control panel on it that drove an icing gearbox? What about a circuit? I kept mum.

As you've seen by now, I took her idea and ran with it. Rather than bake a cake and shape it into a gearbox, I built a gearbox and shaped it into a cake.

I'm afraid I don't have any construction photos, but here goes.

I started with a Lego baseplate. You know, the 12"x12" green things. Except that mine was blue.

On top of that, I built a framework out of Technix pieces. Well, built and rebuilt, really. I wanted a few interlocking pieces. Maybe a belt somewhere. I had a Lego belt - why not use it?

So I stuck in a belt. And then some other gears. Above each intersection, I placed a large wheel, again scavenged from the Mindstorms collections my family owned.

A gearbox completed the train. It's a pre made 24:1 affair - the (already geared-down) Mindstorms motor drives a worm gear that drives a 24-tooth gear. The final result is a 3-6ish RPM rotation.

The final assembly used the 24:1 gearbox to drive a conveyor belt. That belt drove a whole series of small gears, creating the illusion that two larger gears were meshing.

With the mechanism complete, I moved on to the food. I started by baking a spice cake in a wide flat pan. Well, that and a batch of 7-minute frosting. I covered up the legos with a mix of wax paper and shrink-wrap - low friction wax for the moving parts and sticky plastic wrap for the baseplate. That left about 60% of the surface flat, and 30% a few inches elevated (and 10% sloped and kinda crummy to build on). And spinning. The motor worked perfectly and spun the big wheels slowly.

When the cake came out of the oven, I started cutting. With the volume of cake I had, I decided to make three layers over the flat parts, and add a single layer to cover the moving wheels. The final cake would be roughly flush across the top. (In hindsight, I should have added a few inches of border - the final cake wasn't very stable.)

After cutting out pieces for each layer, I added a generous amount of 7-minute frosting. I tried keeping the top surface flat by varying the icing thickness with varying success. The second layer went on easily enough, except for some sliding. By the third layer, pieces of the cake were aggressively trying to escape. Some toothpicks helped hold the entire thing together. 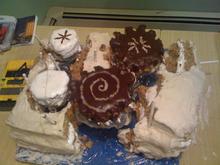 The gears were originally round; I cut small squarish teeth out of them. Of the four moving bits (two gears and two pulleys), I decorated two with a chocolate ganache and two with the 7-minute icing.

By the time that was done, I'd run out of 7-minute icing. A buttercream icing covered the exposed edges of cake. (For a bit of a mechanical look, I decided to leave the interior surfaces un-iced.)

That was the cake, pretty much. Some decorations finished it off. A quick test confirmed that it worked. Aside from some frosting transfer between cogs and lots of slop in the gears, all of the pieces rotated flawlessly.