I live in an off-campus house at college. It's a little thing: three beds, kitchen, dining room, living room. A sofa.

But no coffee table.

Not that anyone in my house drinks coffee, but we've wanted a knee-height table for the sofa for a while. Just to set drinks down on, or to use for homework.

As long as I'm home, I decided to build one. As a design constraint, it's made entirely from 1x3 strapping. There is some reason for the choice. First, at $1.30 per 8' board, 1x3 is cheap. Second, the 1x3 theme matches a toolbox I built this summer. Third, it's cheap. 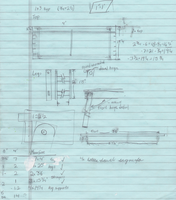 Many of the dimensions were dictated by the choice of lumber. In order to make the most of the wood, I decided to halve the 8' 1x3's for a 4' tabletop. (Well, 3' 11¾". Stupid blade kerf.) A 3" overhang on the sides seemed reasonable, which led to the side stringer dimension of 3'6". I wanted ¼" between the slats of the tabletop, and decided that seven slats would provide a good depth for a table. Those two constraints decided the front stringer's length. The legs fold up under the table for storage, so their dimension was dictated by the space between the stringers. The plans, on pretty blue paper, show how everything goes together. Here are the final dimensions:

I started construction after a trip to Lowes, then Home Depot, for wood. Lowes didn't have much in the way of high quality 1x3's. Nor did Home Depot, but their stock was markedly better. Mind that 1x3's are used for strapping. Hidden away inside of walls, they aren't designed to be seen. I began by cutting all of the parts down to size, paying attention to waste. The entire table was cut from 6 1x3's, so I used 46'2" of 48 linear feet of wood.

To facilitate folding, I rounded the tops of the legs over into a half-round, then roughly sanded them. A center hole finished the rough legs.

Painting was next. Each and every piece of the table received three coats of a latex-based single-coat paint. (I used a pair of sticks to keep the parts airborne, as to dry both sides at once.) The first coat went on very, very spotty. After it dried, a second coat brought the table to a uniform color. The final coat was only applied to the final finished surfaces - the top of the table, the outside of the legs - to ensure an flat surface finish.

Finally, assembly. (Also known as the land of a million screws.) In past projects, I've challenged myself to keep metal to a minimum; last summer, I made a toolbox that was held together with dowels and glue, but not a smidgen of metal. This table is the polar opposite. Nearly 80 screws call it their home, and not a drop of any chemical bind one piece to another. (Unless you count iron as a chemical. Moving on.)

The base was fairly simple. Two front stringers and the side stringers form a box. Clamps held the box together while I drilled a pilot hole, countersunk, and screwed. Each joint is held with two screws, each ½" from the edge of the wood. The third front stringer goes in the middle of the box and stabilizes the tabletop.

Each leg unit is comprised of two legs and a single support. The support is 6" from the floor. As before, it's held on with two screws on each side, each ½" from the edge of the board. The support itself is centered on the leg; I needed a support to hold it in place when screwing. A 1x3 and a little shim worked well.

Four bolts anchor the legs to the table. They aren't anchored by nuts. Instead, the hole in the table is oversized and the hole in the leg is undersized. The bolt slides through the tabletop and threads its way into the leg, providing a secure fit.

The tabletop was the toughest part. I laid down the center and outermost boards first. For the center board, I found the center of the frame and the board, checked the 3" overhang on the side, and attached it. The tabletop is anchored to each of the three front stringers. Each joint uses two screws, ½" from each edge of the board.

The outer boards overhang the edges of the frame by 1" and screws in the frame block vertical screws, so I needed a different attachment pattern. They're held on using four screws centered in the side stringers, and offset by 2" from each side stringer.

I measured even gaps for the other four tabletop boards, then marked screw holes, drilled, countersunk, and drove screws in. The first three took care of all of the tough alignment; finishing was mostly a matter of driving lots of screws.

And it's done. The legs fold down for storage, it's fairly sturdy, and it's coming to Easton with me! We'll probably decorate it some, too. Plain white isn't so exciting.