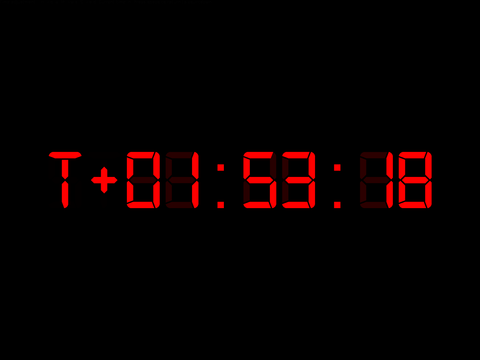 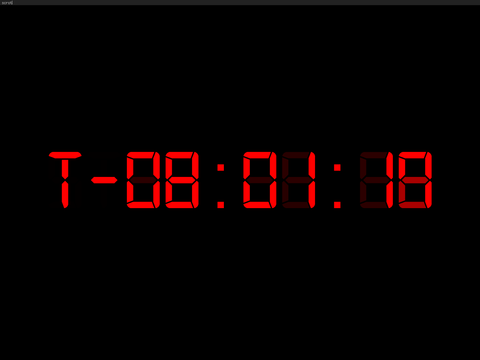 So, um, yeah. I kinda caught scrot (screenshot) in the corner of the frame.

Last night, NASA sent LADEE, an atmospheric observation satellite, to the moon. Satellites are pretty cool. It launched from Virginia, about 100 miles from Lafayette college. A satellite that I can see going to space is much cooler.

Last night, some friends and I headed to Pardee, a great big building with a tall south-facing windows. We burned a few hours playing games and waiting for the launch. I decided to code a little something.

As a disclaimer, I love having fun playing with being serious. So I decided to code a fullscreen red on black countdown timer for the launch.

As usual for these quick little graphics projects, I used Processing. In about an hour, I wrote a little script that calculates the difference in a hardcoded time and the current time. It's a little harder than just subtracting the two times: the naive approach of simply subtracting target hours, minutes, and seconds from current time will result in negative minutes and seconds as the timer runs.

Instead, I needed to calculate the number of seconds between now and launch, then use modulo division to pull out hours, minutes, and seconds.

That's as far as I got last night. Today, I substantially rewrote the code to add more features. It now handles both positive and negative times, switching from T-xx:xx:xx to T+xx:xx:xx at launch time. It's using a digital font now, complete with a background overlay of 88:88:88. There's also a bit of fading as the numbers change, and target time can be changed on-the-fly. It's also set to roll over daily: the timer always reports between T-12 and T+12 hours. That way, a countdown to the wee hours of the morning doesn't report T+23.

It looks a lot like NASA's own countdown timers do. And fullscreen, it's beautiful. Later, I might pack it into a class and use it as part of a larger mission control panel, but for now, it's a nice counter.

As always, the source code is attached below. (All processing libraries are included in the compiled version, which makes the application prohibitively heavy to upload.)