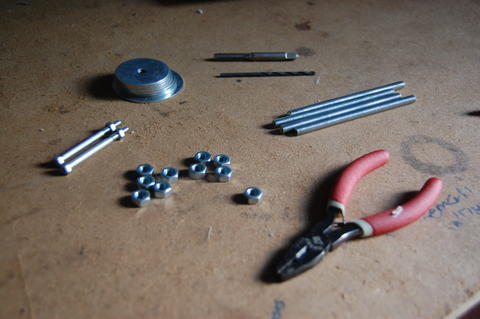 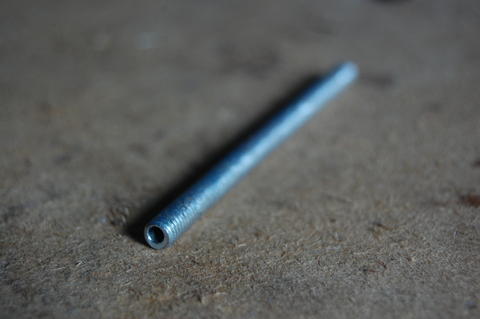 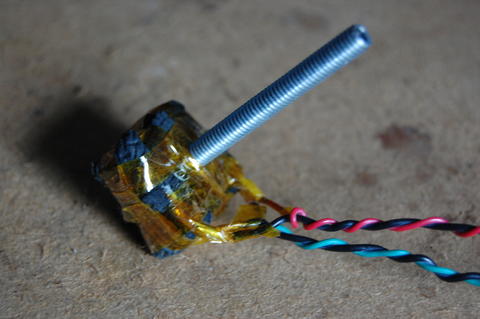 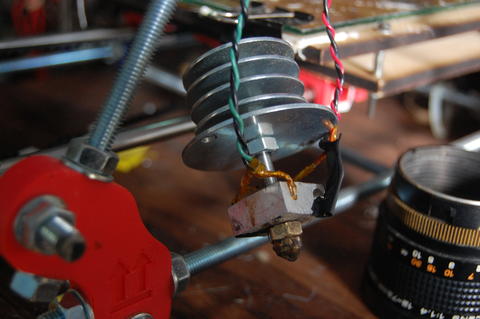 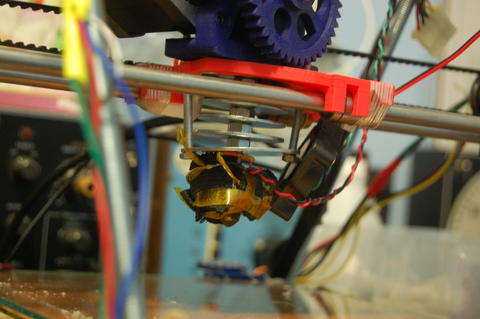 I decided that I needed to build a new extruder that would stay cold at the top. As long as I was rebuilding, I decided to do away with the metal-plastic interface, a common failure point. I found a design online that used a metal heat sink to replace the plastic thermal barrier, and have been building it for the past week.

The first step was visiting the hardware store. They had most of what I needed, mixed between metric and Imperial units (ugh). I bought a few 6x110 mm threaded rods for the central barrel, a pair of 4x50mm bolts for anchoring the hot end, a 2" fender washer for anchoring, and half a dozen 1½" fender washers for the heat sink.

Assembly was surprisingly simple. Even with a drill press, putting a 3mm hole into a 6mm rod is nearly impossible. Reprappers discovered that reversing a drill press works wonders for centering holes. If you clamp the drill bit beneath the piece, and put the rod in the chuck, the rotation of the rod forces the drillbit to self-center. The Afgan lathe method, as its called, made drilling the central tube easy! (Sorry, but I don't like bringing my camera into the workshop. So, no photos of the Afgan lathe.) While I was downstairs, I drilled a pair of holes in the 2" washer to attach it to the bolts on the extruder plate. I also tapped the washers to have M6 threads and cut off 3mm of the old PFTE insulator to use as an alignment ring.

The remainder of assembly was a cinch. I alternated adding M6 bolts and M6 tapped washers, and soon built a tube that resembled a ray gun. The heater block and extruder tip screwed onto the bottom, and the PFTE bit screwed onto the top. I smooshed the raygun into the printer, and it slipped. The extruder couldn't push PLA into the new extruder.

I tried removing it, sliding the PLA in, then attempting to extrude. No cigar.

I tried extruding by hand, with the raygun clamped in a vice. That worked, so the extruder warms up and is capable of extruding. (One of my solder joints broke, which I repaired.)

I injected the extruder with 0.5cc of motor oil. Again, no luck.

Later, I noticed that the hobbed bolt was full of crud - bits of plastic and oil had completely filled the teeth. The next steps, then, are permanently fitting the extruder and switching focus to the hobbed bolt.