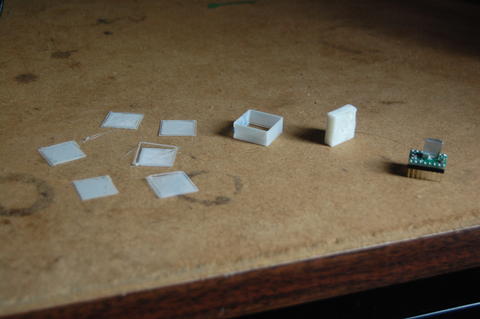 And so a new day dawns, or does whatever it is that new days do before anyone's awake.

After considering yesterday's prints, I made a few changes. First, I reduced the extrusion temperature from 185 to 180. Hopefully, the change will reduce dribble and discoloration of the plastic. Second, I reset the "Extrusion Multiplier" back to 1.0. Previously, the printer was refusing to extrude (mechanical failure, it turns out; not software), and I wanted to see if force feeding it more filament would help. The software fix failed to help the mechanical failure, so I'm resetting the multiplier.

Resetting it introduces a slew of issues, though. The bed was levelled well enough, when the printer was spewing plastic like cheap ... something. Reducing the flow rate requires that I move the print bed. When the printer was spewing plastic, it would adhere anywhere. Decreasing the flow rate requires a corrosponding increase in precision. So, back to step one: printing bed levelling patterns!

The picture above shows all the test patterns I made. From left to right: