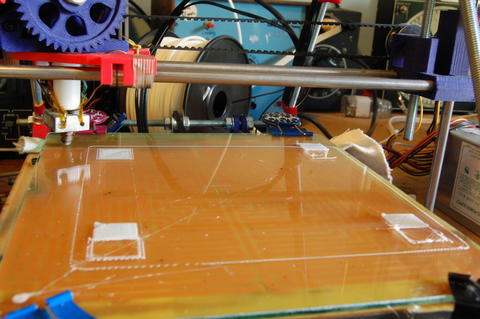 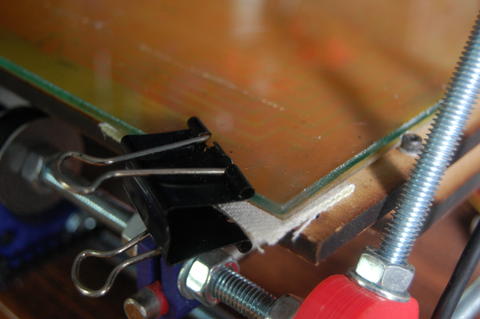 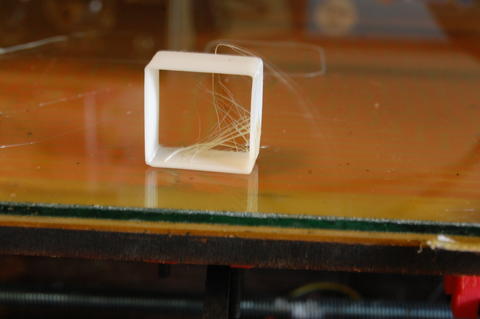 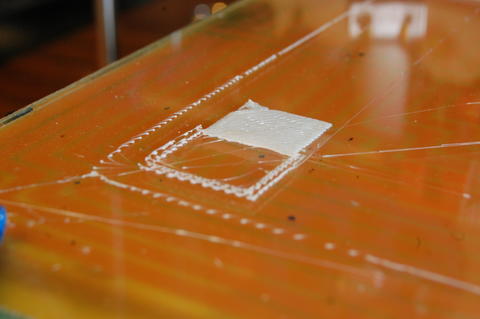 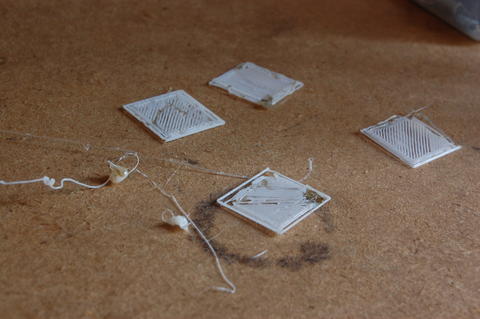 The 3mm filament just came in the mail, so I've started printing. First up: calibration patterns. First of those? Bed leveling. Before that: recap since last time.

The PCB bent as I prepared it for etching, so it wasn't suitable for printing on anymore. I made up a spiffy new glass print bed out of some basement scrap. Cutting glass is really easy! Just score it and snap! I also finally have four working motor controllers. (Soldering carefully does wonders for quality.)

The first bed level test was all right, but the filament kept sticking to the print head and peeling up. On the second and third tries, there wasn't enough space between the head and the bed: the filament was blocked from coming out.

The fourth attempt just looked weird. Due to a loose belt, the lines weren't quite straight. Additionally, the earlier plastic was laid down in dots instead of as a line. The later fill was perfect. I believe that that concludes the bedleveling portion of this adventure.

The tensioner, a pen with a linear bearing stuck on it, was also replaced. Its rubber bands should be more secure now. Hopefully.

The next print is a 0.5 mm thick wall, to check layer height. If the layer height is too low, the head will drag through the previous layer. Too high and the layers won't adhere. It revealed that the dotted lines I noticed before were caused by a less-than-full extruder chamber. After the printer extrudes around 20cm of material, the chamber fills and the dots are replaced by a solid line. I tweaked the layer height up a bit, and was rewarded with a gorgeous box on the second try.

Next in the calibration sequence: infill! Infill describes the stuff that the printer puts inside the print to hold it together. If there's too much, prints will bulge in the middle. Too little and flat tops will become concave. The test pattern is a tall tower, and will take some time to print. The tower looks reasonable on the left and front sides of the printer, but the back-right corner has excess plastic all over it. The extruder seems to be leaking from the top, and spilling onto the print.

That's it for time - I'm heading out to dinner. One last note, though. Heh.